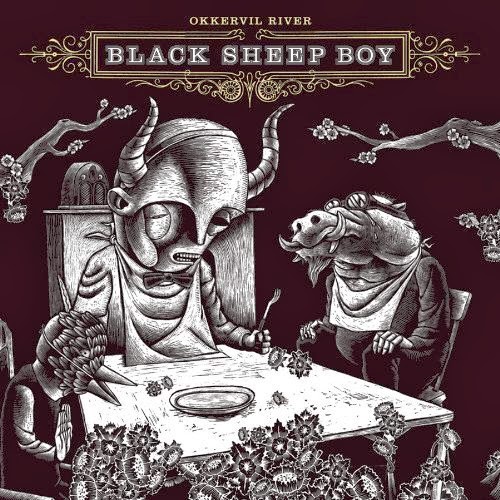 As elucidated in last year’s album list, I rediscovered my joy for Okkervil River with their latest release, ‘The Silver Gymnasium’. There the band delivered a consummately polished album as a bunch of seasoned performers playing directly to their strengths. But, the first Okkervil River album which pulled me in was way back in 2005, the sublime ‘Black Sheep Boy’. By comparison, ‘Black Sheep Boy’ is raw, at times unhinged, measured, and altogether, a haunting character study of the dark underbellies of outcasts, with tales of doomed love, violence, despair and the sloppy attempts at redemption and Process-of-Making-It.
There’s much to be said for being too close to something to be able to provide an objective opinion about it, not that it was ever my intention. Which is to say: to me, ‘Black Sheep Boy’ is perfect. The narrative and thematic cohesion brought about by the enigmatic figure of the ‘Black Sheep Boy’ left an indelible mark in the consciousness of my youth. To me, it recalls a loss of innocence, repressed anger, catharsis, paternal rage, and intense intra-psychic conflict.
Inspired by American folk musician Tim Hardin, the eponymous title track is a by the numbers cover of the Hardin song, and from there the album is a wondrous exercise in mythology creation. Authenticity and the myth are staples of the Okkervil River narrative world, and these themes are mined heavily throughout the album.
http://www.youtube.com/watch?v=PMESDbBHG2c


http://www.youtube.com/watch?v=zlB2XLmA4Ec
For all the harshness of ‘For Real’, often mistaken for a murder ballad, the song strikes at the validity of feeling and experience; the more visceral, the more ‘real’? Is it the case of great pain, great fear making you truly feel alive? ‘A face smashing into the concrete moment? These moments lend themselves to repetition, as if the brain registers and remembers the pain, as if to measure everything else against it.
Some nights I thirst for real blood
For real knives, for real cries
And then the flash of steel from real guns
In real life, really fills my mind


Will Sheff has commented on his dislike for his singing voice, which naturally favours a distinguished melancholic wail, and through the span of albums his voice has improved vastly. However, sometimes I yearn for the abandon of the old River recordings such as this.
‘Black’ with its jaunty piano line betrays the darkest subject matter of the album, alluding to childhood abuse (‘April 12th, with nobody else around; you were outside the house (where's your mother?), when he put you in the car, when he took you down the road. And I can still see where it was open, the door he slammed closed. It was open, the door he slammed closed. It was open, long ago.’) Telling the story from the perspective of the narrator/current lover displaces the emotional weight of the initial act to foreground the burden of loving someone with those traumas. The song ends with the narrator pleading for his lover to let him through the door, mirroring the opening verse’s plea. Speaking for the supporting characters, and turning it into something that becomes almost romanticised (though the players never feel like just caricatures) is typical of Sheff’s songwriting. I feel like I’ve lived a million lives within these songs.
“Baby daughter on the road, you're wrapped up warm in daddy's coat. And I can still see the cigarette's heat. I can't believe all that you're telling me, what is cutting like the smoke through your teeth as you're telling me “forget it.” But if I could tear his throat, and spill his blood between my jaws, and erase his name for good, don't you know that I would? Don't you realize I wouldn't pause, that I would cut him down with my claws if I could have somehow never let that happen? Or I'd call, some black midnight, fuck up his new life where they don't know what he did, tell his brand-new wife and his second kid. And I tell you, like before, that you should wreck his life the way that he wrecked yours, you are no part of his life anymore.”
The more tender moments of the album (‘A King and a Queen’, ‘In a Radio Song’, ‘A Stone’) act as a counterbalance to the visceral punch of ‘For Real’ and ‘Black’, while continually building on the myth of the Black Sheep Boy. There’s a feeling that it’s not a singularity of experience, not a tale told from start to finish, maybe not even the same characters each time.
A black sheep boy revolves over canyons and waterfalls.
A black sheep boy dissolves in syringe or in a shower stall.
He says “there’s plenty of time to make you mine tonight,
there’s plenty of time to make you mine.
What ‘Black Sheep Boy’ is, is a collection of action and consequence, choice and inaction, that pervasive duality of remittance and hope, the ever beckoning dark side of our psyche, a sinister call to arms. For Sheff, it may clearly relate to Hardin and his heroin abuse – most beautifully captured in the album opus, ‘So Come Back, I’m Waiting’.
He says “I am waiting on hoof and on hand.
I am waiting, all hated and damned.
I am waiting - I snort and I stamp.
I am waiting, you know that I am,
calmly waiting to make you my lamb.”
http://www.youtube.com/watch?v=Cpx2USFvuvQ


For me, as long as fear exists, as long as the mirror reflects, for as long as I am aware of the price that we pay for wanting and being, The Black Sheep Boy will always be relevant.
Posted by Unknown at 16:51